From Cottages for Two, to a fell walk for all.

It was a pleasure for Dasher and me to join our guests at Cottages Made for Two for a walk on Friday the 8th November. Peter, Vanessa, Mitzee the Beagle and ourselves set out in the morning, the mission: to show them the sights and delights of Rannerdale Knotts in the Buttermere valley. At 1,165 Ft, it may not have the lofty status of nearby Grasmoor, High Stile or Robinson, but it commands a very respectful position above Crummock Water and Buttermere and in history too, can lay claim to being the site of a noted battle in which the Normans got led up a “blind alley” (Secret Valley) and took one hell of a beating. Their foray, according to legend, was not entirely in vain as they lent a rich infusion to the soil, that every spring leads to the soul lifting vision that is a sea of bluebells on the open fellside. 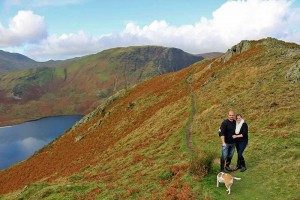 Rannerdale Knotts was certainly a worthy candidate for Peter, Vanessa & Mitzee’s first Wainwright. Seen here, just getting warmed up above Hause Point with Crummock Water and Melbreak in the background

We started at the car park by the side of Crummock water, just north of Hause Point (car park- NY163183). You can see the path on the fellside, just S.W of the car park. A well defined path that becomes a bit of a steep stony staircase (not one for carrying a sofa up anyway!) but it’s probably safer this way in the wet. 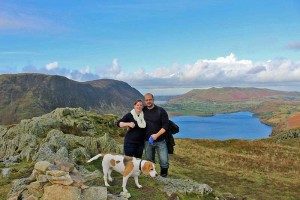 We made the summit in under an hour, with the weather improving all the time and allowing clear views of Crummock and also Loweswater in the distance. After a few “conquered the summit” photos we made our way along the ridge of Low Bank.

There are plenty of photo opportunities along the ridge: looking along either the Buttermere valley toward Haystacks and Great Gable beyond, or north over Loweswater to the Solway firth in the distance.

Returning back via Rannerdale itself and enjoying the beauty of this quiet valley and its babbling beck. The only other beings we passed were the sheep who paid scant attention to our invasion. 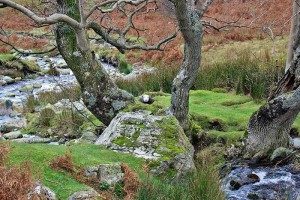 I can see ewe!